Flight of the inspection drones: One start-up’s “crazy” idea to disrupt building inspections with tech

Roadworks may soon be a thing of the past as small robots will be sent down pipes to make repairs instead of digging up roads. Four universities in the UK are working together to develop a collection of “insect-like” robots that will fix and inspect underground pipes. The robots, around one centimetre in size, will be able to fly, swim and crawl through pipes used for water, gas and sewage. They will also allow utility companies to make a “Google Maps-style” plan of their pipe networks as the devices travel underground. The Government has now invested £26.6m in the project, as it hopes the technology will put an end to the disruption caused by 1.5 million road excavations that take place every year. These roadworks cost the country more than £5bn a year in traffic closures and lost business, according to the Government. Continue> https://www.telegraph.co.uk/technology/2018/12/31/uk-invests-micro-robots-could-make-roadworks-thing-past/ #drone#drones #ugv #unmannedvehicles #DroneExpert #Tech #DroneOperator #roadworks #inspection

This post was originally published by Drone Accelerator (Surface Drones) on December 31, 2018 9:46 am. Please visit the original post to read the complete article. 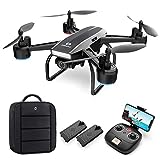